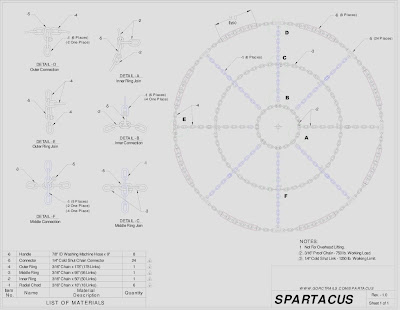 Tom Erb designed Spartacus several years ago to help with much of the rockwork at Klondike, but since we've been using it quite a bit as of late, I thought I'd mention it again.
This is a very clever device, made out of chains arranged in concentric circles, that lets you move heavy objects, usually rocks, when you don't have the luxury of bringing in heavy equipment. The rock is maneuvered onto Spartacus, and then up to 8 handles allow for a number of people, strong of back, weak of mind, to carry or drag it to the desired position.
The plans for building your own have been released under the Creative Commons license, or you can pay Tom to build one for you.
Posted by pilznr at 5/19/2008 10:45:00 AM